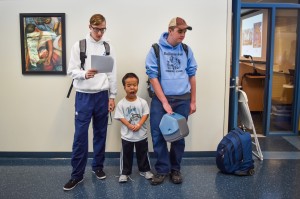 It’s happened to almost every bell at least once. You attend class, as usual, but this time, the teacher is unexpectedly not there. You check every form of communication whatsoever and even ask if anyone knows about this abnormal disappearance. Still nothing. Therefore, one person tells everyone that if the teacher doesn’t show within fifteen minutes, students are supposedly free to leave. Hopes rise for the possibility of a free period, but is this policy fact or simply a myth?

This rumor has circled the Bellarmine campus for years. From the idea that the rule was made by multiple, coincidental observations or its use in other schools, many have a reason to believe its authenticity. But contrary to popular belief, the myth is disappointingly false; you are not permitted to leave despite having no teacher. According to Mr. Lowney, using that designated time as a free period is essentially cutting class. “When a student leaves, it’s definitely the wrong approach. They should try to find a free teacher and ask them what to do.”

Mr. Talesfore himself, came to address the myth. “At one point in time, the rule was once true. I graduated in ’84, and when I was a student, it was still enforced because there were few substitutes. I don’t know when the change took place. However, we are trying something similar. If you’re a senior, you just need to get the homework and then you are dismissed.”

The thought of having an unanticipated free is now no more. The rules can always change back to its original state. In the mean time, before celebrating an absence, think twice because what you may see as a “free period” is cutting class in the eyes of a teacher.