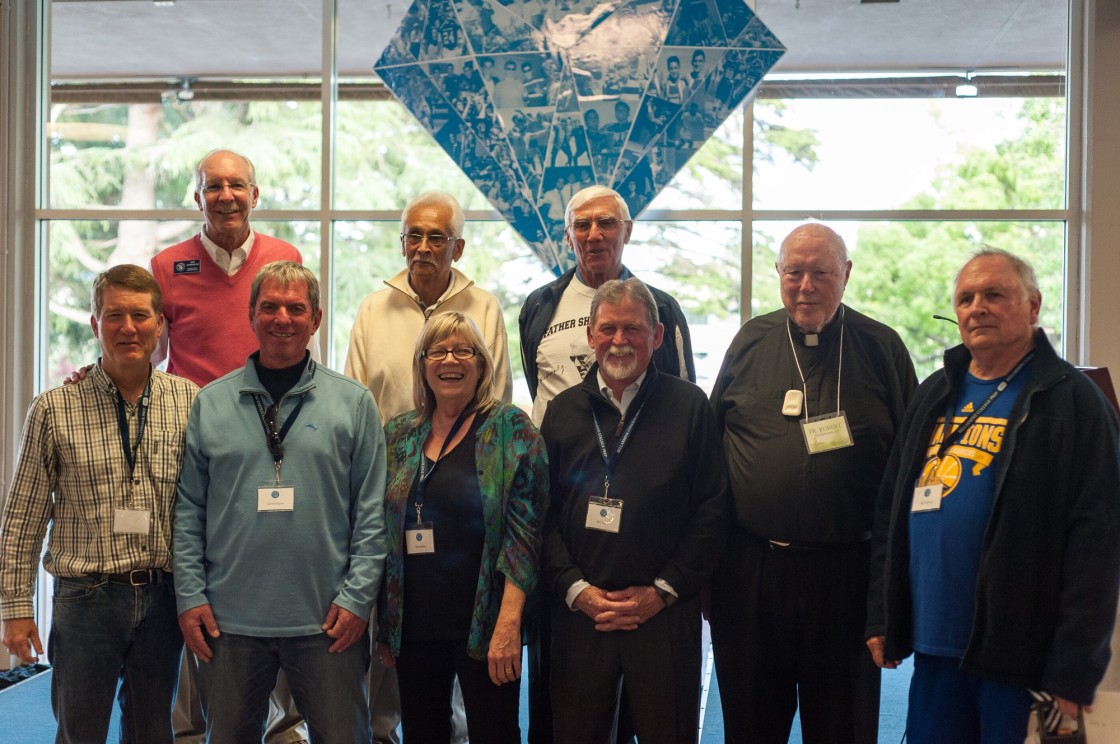 On Thursday, May 11, Bellarmine held its first public Faculty Appreciation Night in honor of nine retiring faculty members: Father Robert Shinny, SJ, Pat Taylor, Kim Jones, Juan Navarro, Father Bob Mathewson, SJ, Bill Sullivan, Gary Cunningham, John Scherbart, and Larry Rogers. Although it is not unusual for Bellarmine to have a retiring faculty member, having 9 faculty members retire in one year is unprecedented for some. In fact, the sheer number of retirees was one of the key reasons for making Faculty Appreciation Night a public event.

“The major thing was that we had nine faculty members retiring. Every year we have faculty members retire, however nine was the highest number that we’ve had in a long time; maybe even ever. I don’t think we’ve ever had nine faculty members retire at once,” says Mr. Zuniga ’06, director of alumni relations, “We wanted to make sure we did something special for them, because they deserve it. That’s why we wanted to open up the event.” In the past, only faculty attended faculty appreciation night. This is the first year where faculty appreciation night was a public event. To appreciate the departing faculty, those planning the celebration opened the event up to alumni, parents, former faculty, and students. For Mr. Zuniga, one of the people in charge of planning for the event, opening the event up to the public required significant planning and hard work.

“We started planning in February. We know we wanted to do the event before school got out, because when school gets out, the teachers go on vacation and are harder to log down, so we had to do it before the school year ended,” says Mr. Zuniga, “It’s also tough doing it at the end of the year because of finals and AP tests. It started in February, and a lot of work picked up around April.” Due to conflicting events, such as finals, AP exams, teacher vacations, and the fact that teachers retire at the end of the school year, the event occurred on Thursday, May 11th. The event holds significant meaning for many Bellarmine students and alumni who are close to the departing faculty. Mr. Zuniga himself, for example, worked with many of them as colleagues.

“I have great relationships with all the people leaving. I’m pretty sure I was never taught by any of the nine faculty members as a student, so I got the chance to meet them as a colleague when I started working here. Gary Cunningham has always been very supportive and I worked with him very often,” says Mr. Zuniga, “In addition, John Navarro is someone else very special to me. I’ve run a lot of events for Bellarmine over the years, and he’s typically been the person who helps me run those events. They’re all really good people.” Many others share Mr. Zuniga’s sentiment. People who were taught by the retirees or were colleagues with them all have stories and experiences with the departing faculty. As these faculty members may go into retirement or perhaps other work, Bellarmine students should remember the wise words of Father Shinney: Go Bells!