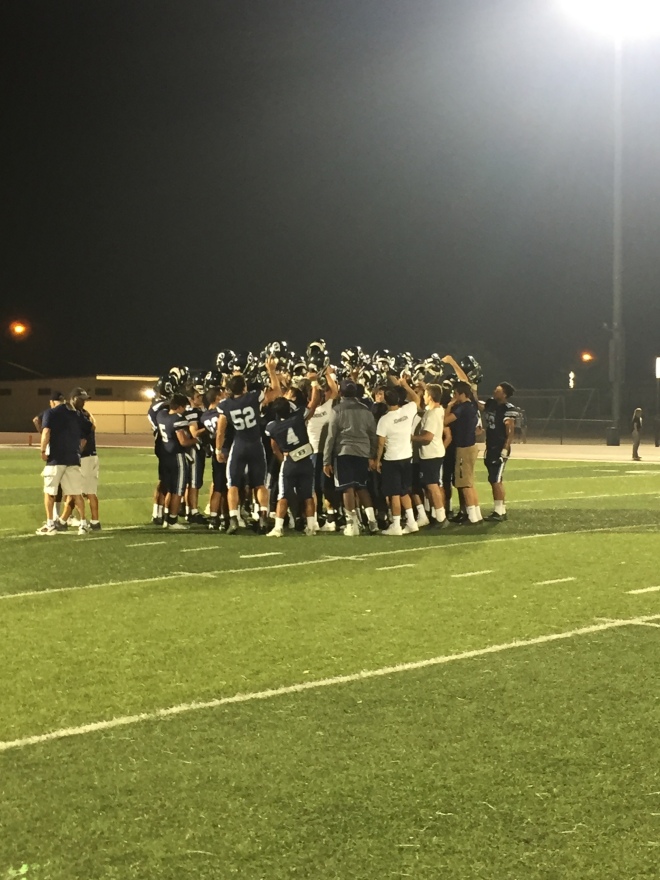 SAN JOSE, CA – With temperatures surpassing 100 degrees, and a series of careless mistakes, Bellarmine seemed to struggle to get any semblance of a drive going throughout the first three quarters.

Facing third down pinned at their own five-yard line early in the fourth quarter, it looked likely the Bells would once again be punting the ball back when senior running back Noah Laine tore off a 57-yard rush to put the Bells in enemy territory. The play was enough to set up a 21-yard TD pass from junior Harry Mingrone to senior Austin Ajiake to bring the Bells within three points. The sequence of plays energized the Bells’ fourth quarter comeback, as Bellarmine Prep edged out Clovis North, 16-13, in its home opener.

Through the blistering heat of the night, Clovis North opened the game with a short squib kick. After a tricky bounce, the Broncos recovered inside the opposing 25-yard line. Despite the favorable field position, the Bells’ red zone defense was able to hold Clovis North to just a field goal. For the remainder of the first half, both teams traded possessions ridden with punts and turnovers, coming out with only field goals from 29 and 36 yards for Clovis North’s Hiroki Naito and 35 yards for Bellarmine’s Ryan Hutchinson, making the half time score a meager 6-3 in favor of the Broncos.

Riding the momentum of an onside kick recovery to open the second half, the Bells marched all the way down to the opposing 10-yard line, looking to punch in the first touchdown of the game. The Clovis red zone defense had other ideas, as a Broncos’ defender stripped the ball and returned the fumble 90 yards for the touchdown. Just as momentum seemed to swing towards Bellarmine to open the half, Clovis North struck back.

An obvious explanation for the carelessness and sloppy play in the first three quarters is how much of a factor the heat played in the game.

“I was just giving everything for my brothers,” said Laine. “The whole game I was just thinking about how hot it was, but our training kicked in and I just got to give it up for everyone else on the team.”

Laine had an impressive night on both sides of the ball, contributing 96 yards on seven carries on offense and a huge forced fumble on defense.

As the hot night continued, the Bells’ disciplined conditioning began to pay off into concrete results. Following the touchdown drive sparked by Laine’s 57-yard rush, the Bells’ defense forced a turnover on downs to give their offense a solid chance to take the lead. Ajiake broke free for a 45-yard scoring run to give Bellarmine its first lead of the game with just over three minutes remaining. Ajiake finished with a heavy workload of 97 yards on 19 rushes and a touchdown, while also adding 29 yards and a score as a receiver. Behind Laine and Ajiake, the Bells seemed to have just enough gas in the tank to finish the game out with a win.

“The way you prepare for the heat is you condition, which we have been doing since January,” said Bellarmine head coach Mike Janda. “Conditioning allows you to play in all conditions, and it really paid off again tonight.”

The Bellarmine sideline after the game was full of emotion, both from the win and from the first quarter leg injury to all-WCAL defensive lineman Cade Hall.

“We know we need to play much better than this,” said Laine. “But we realize a win is a win and this one really showed our mental toughness.”

Clovis North struggled to respond all game with their passing game, usually a focal point in their pro-style offense. Sophomore quarterback DJ Frampton put up 125 yards in the air on 12-of-36 passing with one interception.

In the end, the Bells toughness down the stretch, especially on third down, separated them from the Broncos. Bellarmine will hope to keep the undefeated streak alive as they face Gonzaga Prep coming down from Washington next week. Clovis North will try and rally as they host 0-2 Buhach Colony next week. Come out and support the team this Friday at the Bellarmine Alumni Tailgate. Kickoff is at 7pm at San Jose City College.