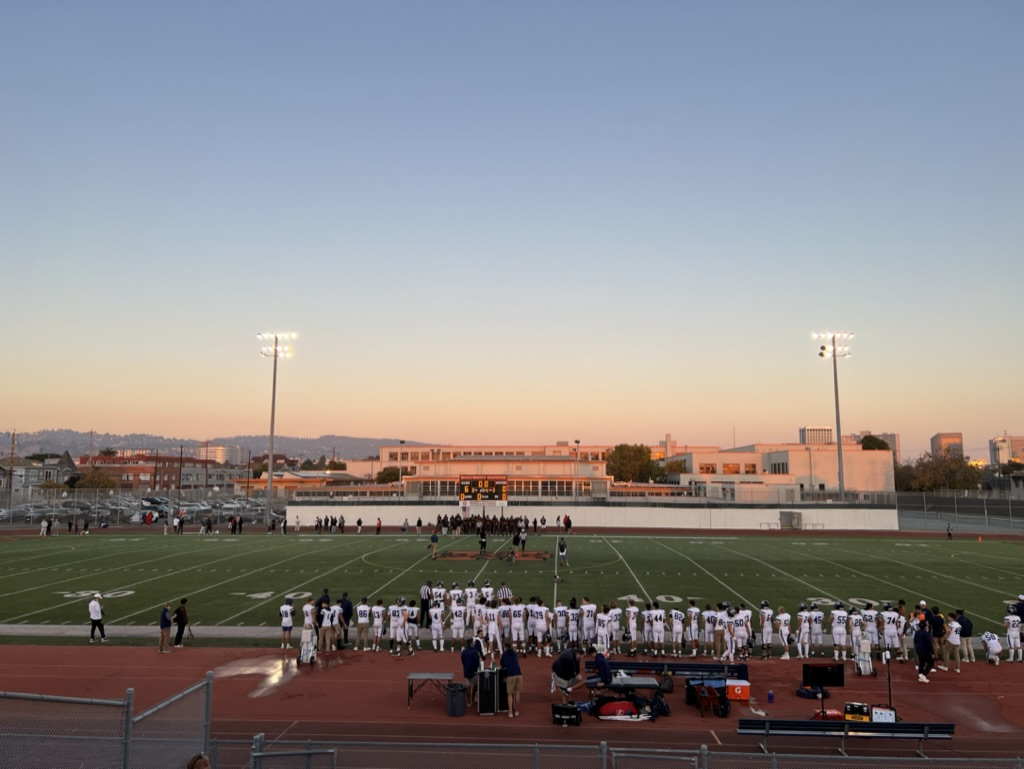 OAKLAND, CA — “Extremely hard fought game. Even though we lost a close game we took a step in the right direction as a team.” These were the words of Bellarmine’s defensive coordinator, Joe Gigantino, after their loss in OT. While small mistakes were the ultimate downfall of the Bellarmine Bells as they fell short to the McClymonds Warriors 24-21 in an OT thriller, there were still many positive takeaways from the game.

Bellarmine opened up the scoring early in the 1st quarter when Nate Escalada ‘23 ripped a 33-yard TD to Colin Lakkaraju ‘24 up the seam. Shortly after, McClymonds answered back with an 81-yard rushing TD by Jaivian Thomas to tie the game at 7-7.

Throughout the game, both defenses were on point, and McClymonds forced Bellarmine to multiple 3-and-outs early on. After the Bells punted, McClymonds struck back with a 52-yard passing TD to Tajir Golden to take the lead at 14-7.

At halftime, head coach Jalal Beauchman reignited an exhausted Bellarmine team with a passionate speech, which ultimately carried over to the second half. His speech encouraged the players to give it all they got and leave it on the field.

After a slow start to the 3rd quarter, McClymonds settled for another field goal attempt, and it was blocked AGAIN. This time, Jake Hanson ‘23 returned the block field goal all the way for a TD, cutting McClymonds’ lead to 21-14.

After a series of defensive stops by both McClymonds and Bellarmine, the Bells remained down by 7 entering the 4th quarter. With just 21 seconds left, Bellarmine tied the game with an 11-yard TD catch by Wilson Pimentel ‘23. This last-minute goal-line fade officially sent the game into overtime.

In OT, McClymonds won the coin toss and was forced to settle for a field goal, giving them the lead at 24-21. With a chance to win the ballgame, Bellarmine opted for a QB run on the 1st play. McClymonds was able to force a fumble on the QB run and Gregory Kenny from McClymonds recovered the fumble to seal the game.

After the game, I was able to catch up with Bellarmine’s defensive coordinator, Joe Gigantino, where I asked him about some key takeaways from the game. Coach Gigantino said:

“We had multiple chances to throw in the white flag but our kids didn’t. They made the tough plays in crunch time and came back against a really good football team and as a coach, that made me proud.

Defensively we let up some big plays in the first half but we were stout in the second half and gave our offense a chance to come back and tie the game.

We are close to being a really good football team we just need to continue to improve in all 3 phases of the game and learn to FINISH!”

After starting the season 0-2, the Bells look to bounce back for their first win against San Leandro High School next Friday in San Leandro. Whether it be Parker Threatt ‘24 or Nate Escalada ‘23 at QB, the Bells are ready for another battle.