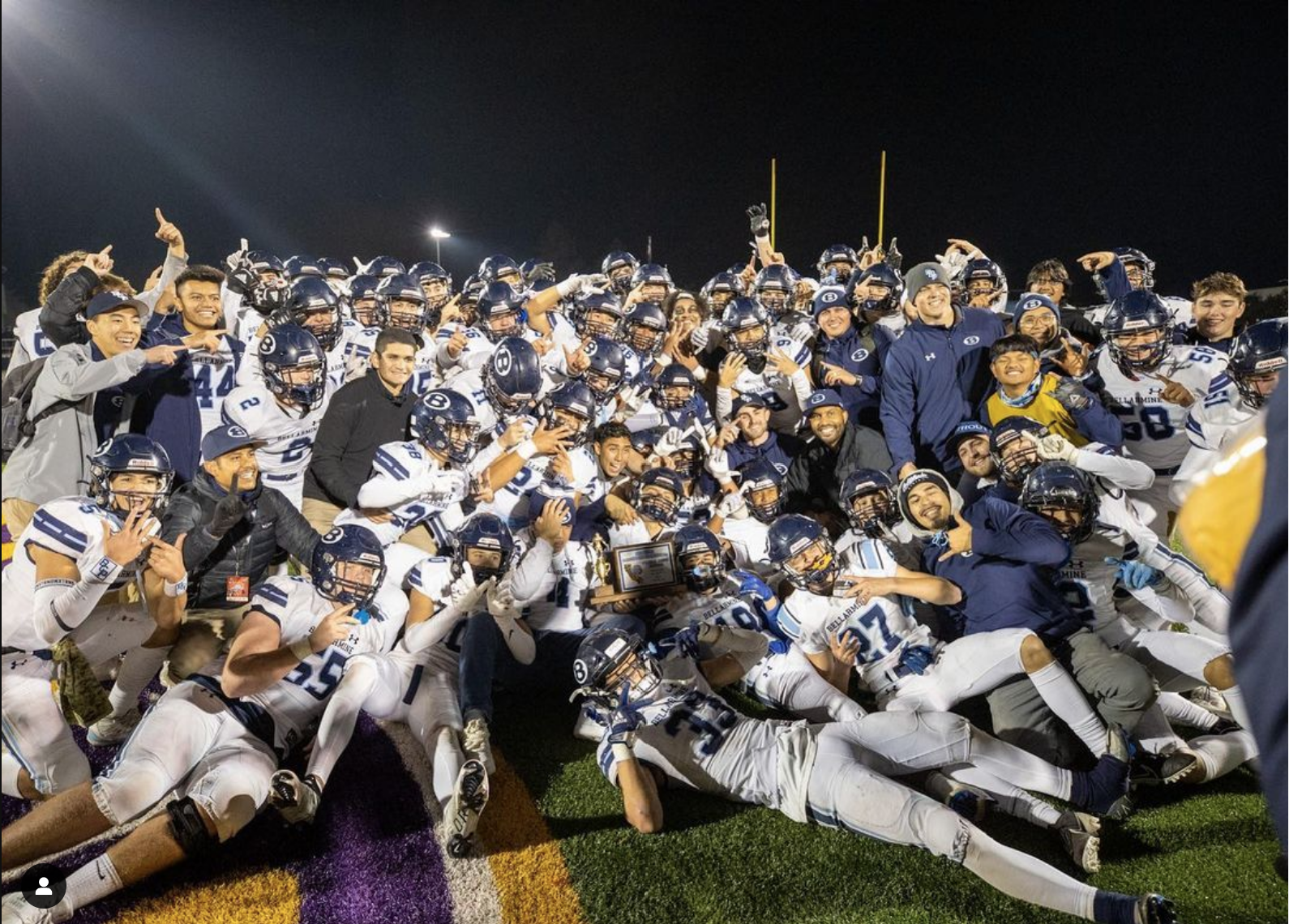 SAN JOSE — San Jose City College was rocking with fans for the CCS Division II Championship Game between the Bellarmine Bells and Saint Ignatius Wildcats. Although Bellarmine is traditionally the home team at San Jose City College, they were the visiting team this time because they were a lower seed than St. Ignatius. Bellarmine won the coin toss and chose to defer to the second half. Little did Bellarmine know that after four hard-fought quarters, they would be the CCS Division II Champions.

The 1st quarter started with a bang as St. Ignatius scored a 71-yard TD on a fumbled snap by QB Soren Hummel ‘25. Bellarmine responded immediately with a 6-yard rushing TD by Jake Hanson ‘23. St. Ignatius almost responded with another TD but RB Jarious Hogan ‘25 coughed up a costly fumble in the red zone recovered by Bellarmine. Unfortunately, Bellarmine could not capitalize on the turnover and got stopped on a 4th down attempt. After multiple 3-and-outs, the 1st quarter ended tied at 7-7.

The 2nd quarter opened with a HUGE interception by Bellarmine’s Brandon Broch ‘23 on a screen play intended for Jarious Hogan ‘25. A big pass-interference penalty on St. Ignatius and a big run by Ben Pfaff ‘23 set up a rushing TD by QB Nate Escalada ‘23 on a read-option play. St. Ignatius responded right away with an 80-yard TD to WR Pierce St. Geme to tie the game at 14-14. Bellarmine and St. Ignatius traded interceptions with each other to bring the game to halftime.

The 4th quarter was dominated by the defenses of Bellarmine and St. Ignatius. Both defenses forced the offenses to multiple 3-and-outs. The play of the game came with 3:50 left in the 4th quarter when Bellarmine’s Braden Cantlen forced a FUMBLE on St. Ignatius’ Jarious Hogan ‘25. Bellarmine ended up RECOVERING the football in St. Ignatius’s territory and ran the clock until Ben Pfaff ‘23 scored a 9-yard rushing TD to put Bellarmine up 21-14 with just 1:01 left. Now in panic mode, St. Ignatius was not able to respond and convert on a 4th down sealing the game for the Bells.

Bellarmine had not won the CCS Title since 2015 giving them their eighth section title. The Bellarmine Bells will continue their quest for the CIF State Championship as they host Vanden High School this Saturday (12/3) at 6 pm @San Jose City College in the 3-A NorCal regional game! Good luck, Bells!

December Short Story of the Month Released for the Bell Writing Collective! Check it out by clicking me!