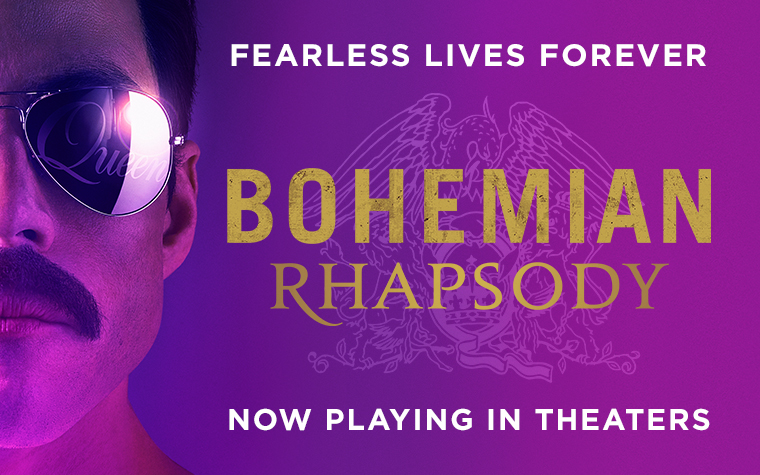 What is Bohemian Rhapsody? It’s the name of a hit song by the rock band, Queen, of course, but it’s also the name of a movie about Queen and its lead singer Freddie Mercury. Through the eyes of someone who knows next to nothing about Queen except what songs they sing, this movie is a decent one. However, if you happen to know anything about the real history of Queen and the lives of its members this movie with its historical inaccuracies can be frustrating to watch.

The first half of the movie is a journey through the creation and success of Queen as they create hit after hit and perform around the world. It makes you feel good and energized watching Freddie Mercury, portrayed by Rami Malek, dance around the stage while Queen’s hit songs blast through the speakers. During this energetic first half however, there are scenes and lines that begin to hint at a darker second act as Freddie starts to drift away from the band, showing up late and acting hostile towards the other members of the band. Eventually, as the band reaches its peak, Freddie falls to new lows and submits to the constant partying and substance abuse that drives so many bands apart.

While all the actors and actresses in this movie were great, Rami Malek really stands out from all the rest with his emotional performance. Malek portrays Freddie’s behavior and style amazingly and makes a seamless transition from an eccentric rock star, to an arrogant man lashing out at his friends, and finally back to a man full of determination and humbled by his past. His portrayal of Freddie takes the fans with him on the emotional rollercoaster that is Freddie Mercury’s complicated life.

There are also some other actors that deserve a mention for the work they put into the movie. The other members of Queen were always onstage with Freddie and did a great job of creating an interesting dynamic between the band members. Gwilym Lee portrayed the guitarist Brian May, Ben Hardy played the drummer Roger Taylor, and Joseph Mazzello performed the role of bassist John Deacon. Lucy Boynton, who portrayed Mary Austin, Freddie’s former wife and best friend for life, was also an integral part of the movie. Finally, Allen Leech played Paul Prenter, a man who worked for the band and ended up encouraging Freddie’s bad habits, driving him away from the band and manipulating him. Allen Leech was a great guy to hate and he played his role as an antagonist outstandingly.

A huge part of this biopic about Queen was the iconic music. Despite being the actor playing Freddie, Malek didn’t end up singing Queen’s iconic songs in the movie. When asked about this by Metro USA, Malek was quoted saying “It is an amalgamation of a few voices. But predominantly it is my hope and the hope of everyone that we will hear as much Freddie as possible. I think that is the goal for all of us.” While on set, Rami Malek, Gwilym Lee, Ben Hardy, and Joseph Mazzello all played their instruments and sang for real, but most of the time it was substituted for Queen’s real music, as there is no replacing their iconic style.

Now with the good out the way, it’s time to address the elephant in the room: the many inaccuracies that appear throughout the movie. Now, it’s understandable that not everything is covered, as going through the entirety of Freddie Mercury’s life would take much longer than two hours, but there are some big differences between real life and what happens in the movie. One big cause of conflict within the band is solo deals, but in real life, Freddie’s solo album didn’t cause the band to split as both Freddie and Queen released songs around the same time and Roger Taylor released a solo album way before Freddie did. Perhaps the biggest difference is when Freddie Mercury was diagnosed HIV-positive. In the movie, the diagnosis is used to make his 1985 LiveAid performance seem more cinematic. In reality, he didn’t know until around 1987 and the band wasn’t informed until 1989.

All in all, the movie had some good and some bad. The music, of course, was fantastic and the acting was outstanding, but the slow-moving plot and the many historical inaccuracies took a lot away from the movie. All in all, it’s up to you if you want to see the movie, but I think that this movie about a legendary rock band should have been as good as they were.