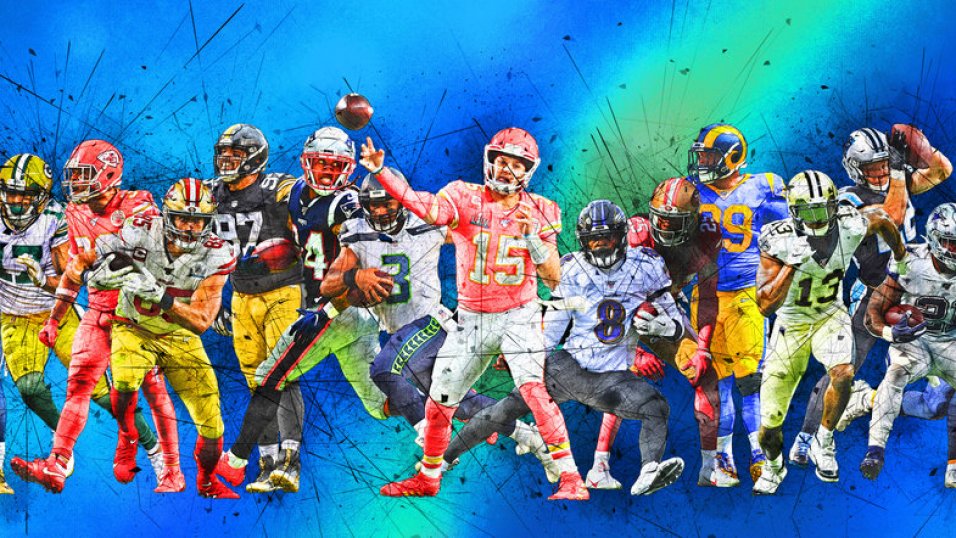 NFL Recap: First 1/3 of the season

With the NFL season a little over a third of the way complete, some teams’ futures have already been decided. The Chiefs have their division on lock and look like the NFL version of the 2017-2018 Golden State Warriors. The Seahawks seem to be untouchable, as Russel Wilson competes with Aaron Rodgers in the MVP race. The the 49ers, former NFC champions and reigning Super Bowl runner-ups, have been plagued by injuries, forcing them to compete for a Wild Card spot, as they sit last in their division. Moreover, the AFC North looks completely different, as the Cleveland Browns are a legit contender, the Steelers have unlimited weapons on offense and may have the #1 defense in the NFL, and the Ravens, well they are still led by the reigning unanimous MVP Lamar Jackson, who ceases for nobody. On the flip side, if you thought the NFC East was bad last year, that was nothing compared to what it is this year. The winner of the NFC East will likely hold a record of 7-9 or if they are lucky 8-8, as the Eagles are always dealing with injuries and some controversy at QB and the Cowboys, well they are the Cowboys, best known as the Dallas “8-8” Cowboys. Ultimately, this will be a season for the record books, with the majority of stadiums empty, disease spreading throughout the country, as teams attempt to stay locked in for the entirety of an atypical NFL season.

Year-in and year out, Russell Wilson has shown the Seahawks nothing but dedication and consistency. In his second year in the league, he turned a team which he led to the playoffs into a dynasty with 26 touchdown passes and 3,357 passing yards. His craft and value wasn’t noticed by anyone in the league, except the Seattle Seahawks who offered him a $140 million, 4 year deal in 2019. Many critics and analysts downplayed Wilson’s ability and claimed he wasn’t that guy. This season, Wilson has proved all of them wrong, notching the best record in the league standing at 5-0 coming off of Seattle’s bye week. Wilson appears to be at the very top of the MVP race, right with fellow veteran QB Aaron Rodgers. Wilson is 3rd in total passing yards, 1st in touchdown passes, 1st in completion percentage, 1st in quarterback rating (QBR), and 1st in average pass yards.

Aaron Rodgers attempts to prove to doubters and his own organization wrong:

Despite earning the #2 seed in the 2019 NFL Playoffs, the Green Packers, led by future hall of fame QB Aaron Rodgers, fell short in the NFC Championship game when faced with the incredible run game of the San Francisco 49ers. Head coach Matt Lafleur as well as the Packers organization began to doubt Rodgers’ ability as a superstar QB in the NFL, and made a statement pick in this year’s draft with the 26th overall pick by taking Jordan Love, QB Utah State. Heading into the season, ignoring the heaving chip on his shoulder, Rodgers embraced the hate and doubt from critics and has now led his team to a dominant 4-1 record. Rodgers and the Packers lost to Tom Brady and the Buccaneers in Week 6, however there is no shame in that, as the Bucs defense is arguably one of the best in the entire NFL. Expectations in Green Bay are through the roof, as every player on their roster has his eyes locked on the beloved Lombardi Trophy.

Moving on to the NFC East, also known as the NFC least for its dreadful football. Last season, with just a 9-7 record, the Philadelphia Eagles won the NFC East. The other three NFC Division winners: New Orleans Saints, Green Bay Packers, and San Francisco 49ers had records of 13-3. This season, all four teams in the NFC Least are off to atrocious starts once again. The New York Giants are 1-5, Washington is 1-5, Dallas is 2-3, and Philadelphia is 1-4-1. Believe it or not, but with just a 2-3 record, if the playoffs started today, Dallas would be the 4th seed with a home playoff game! Ultimately, the division title is going to come down to Dallas vs. Philadelphia, and do not be surprised if the winner of this division has a 7-9 record when it’s all said and done.

The best division in the NFL:

Now for the division everyone has been raving about. This division may contain three playoff teams when it’s all said and done. Flying under the radar, The AFC North is secretly the top division in the entire NFL, packed with powerhouse teams. The Ravens, Steelers, and Browns will battle for the division title and each division game will matter more than ever. All three of these teams will have similar records around 11-5, 12-4, and 13-3. There will be games down to the wire, games filled with blood, sweat, and tears, and by the end of all of these action-packed divisional regular season games, one of these teams will be 12-4 and the other 11-5, and both will have to settle for Wild Card spots, while the one team 13-3 receives home playoff games throughout the entirety of the playoffs.

TB12 and the Bucs are a Wild Card?

We must not forget about the most anticipated debut of the entire year, that is how will Tom Brady perform without Bill Belichick, as well as who will come out on top in the NFC South? The new look Buccaneers look incredible on paper, but have had some difficulties throughout the first couple of weeks. Opening night, they were hit with a reality check after facing off against a very good Saints team that has had its struggles, but appears to be the leading candidate to take home the division title. Following Week 1, the Bucs looked solid, going on a three-game winning streak, taking down the Panthers, the lowly, depleted Broncos, and the dark horse Chargers, led by rookie QB Justin Hebert who has had an incredible rookie season.

However, in Week 5 Tom Brady faced what seems to be his kryptonite: Nick “the magic man” Foles. Brady played a terrible game, while also receiving little help from his offensive line. The line suffered from many false starts as well as an unnecessary roughness penalty, in which the Bucs center went out of his way to headbut a Bears player, backtracking the offense even more, which completely ticked Brady off, as many viewers could see him lose his mind on the sideline. Brady went on to have a chance to save the game with a final drive, but forgot what down it was, as he threw an incompletion and lost to a defensive-minded Bears team that also did not play their best football. In Week 6 however, Brady dismantled a sorry Green Bay defense and dropped 38 points on their heads. As of now, the Buccaneers seem to be very inconsistent, but when they play well they look to be a championship caliber team. By the end of the year, although Carolina is playing solid football, the Saints and Bucs will be neck and neck for the division title, so if Chris Godwin and Mike Evans can stay healthy and Bucs stay consistant by avoiding careless penalties, they appear to be the better team. Whoever falls to 2nd place should be able secure a Wild Card spot, because both teams are good enough to make the playoffs.

Transitioning to the AFC East, a division that has been practically owned by Tom Brady and the New England Patriots for the past 20 years, the Buffalo Bills have got off to a hot start this year, and despite losing to a physical, well-balanced Titans team in Week 5, they sit at 4-1 heading into Week 6 atop the division. The main reason for this? Josh Allen. With the addition of a Pro-Bowl caliber WR in Stefon Diggs, Josh Allen seems to have dramatically elevated his game, and seems to be having a breakout year. Do not be surprised if the Bills are 11-5 with a division title and a home playoff game by the end of the regular season.

Lastly, the NFC West. This division is very unique, as one team, the Seattle Seahawks, seem to be running away with the division title, while two other teams are very good Wild Card contenders, and the team in last place happens to be the reigning Super Bowl runner-ups. Despite fooling teams with trickery, reverse sweeps, and an established run game last season, Kyle Shanahan’s 49ers have looked dreadful this season. On the defensive side of the ball, they lost one of the best pass rushers in the game in Nick Bosa, several RB’s have been hurt, guys have been in and out of the line-up, and to make matters worse, although starting QB Jimmy Garropolo has been injured, he recently recovered and returned to face the Dolphins in Week 5, yet managed to throw 2 interceptions, only completing 41% of his passes, earning himself a visit with the bench for the entire second half. Ultimately, do not count them out but the 49ers do not look like a playoff caliber team, the Seahawks seem to be a Super Bowl contender, as DK Metcalf is establishing himself as a top 5 receiver, and keep an eye on the Cardinals and the Rams for one of those Wild Card spots.

All in all, at the end of Week 6, there are a handful of teams that appear to be capable of going on a tremendous Super Bowl run. Some of the obvious ones consist of the Seahawks, Steelers, Titans, Ravens, Packers, and Bills. However, there are many dark horse teams that in a typical NFL season would be obvious contenders, but due to their slow starts appear to be out of contention. Take the Saints for example, who have an incredible defense that is not playing up to its expectations and has started out flat in every first quarter. Moreover, Michael Thomas has been out all year, so getting him back in the lineup will be a game changer: do not count them out. Looking far ahead into the future, a Super Bowl consisting of either the Pittsburgh Steelers, Kansas City Chiefs, Seattle Seahawks, or Green Bay Packers would not be surprising in the slightest, as all have proven to be dominant in these first six weeks. When push comes to shove, this season will be all about which team can generate their own fuel, without fans in the majority of the stadiums. The theme of this 2020-2021 NFL season will revolve around perseverance, mental toughness, and ultimately all around execution.