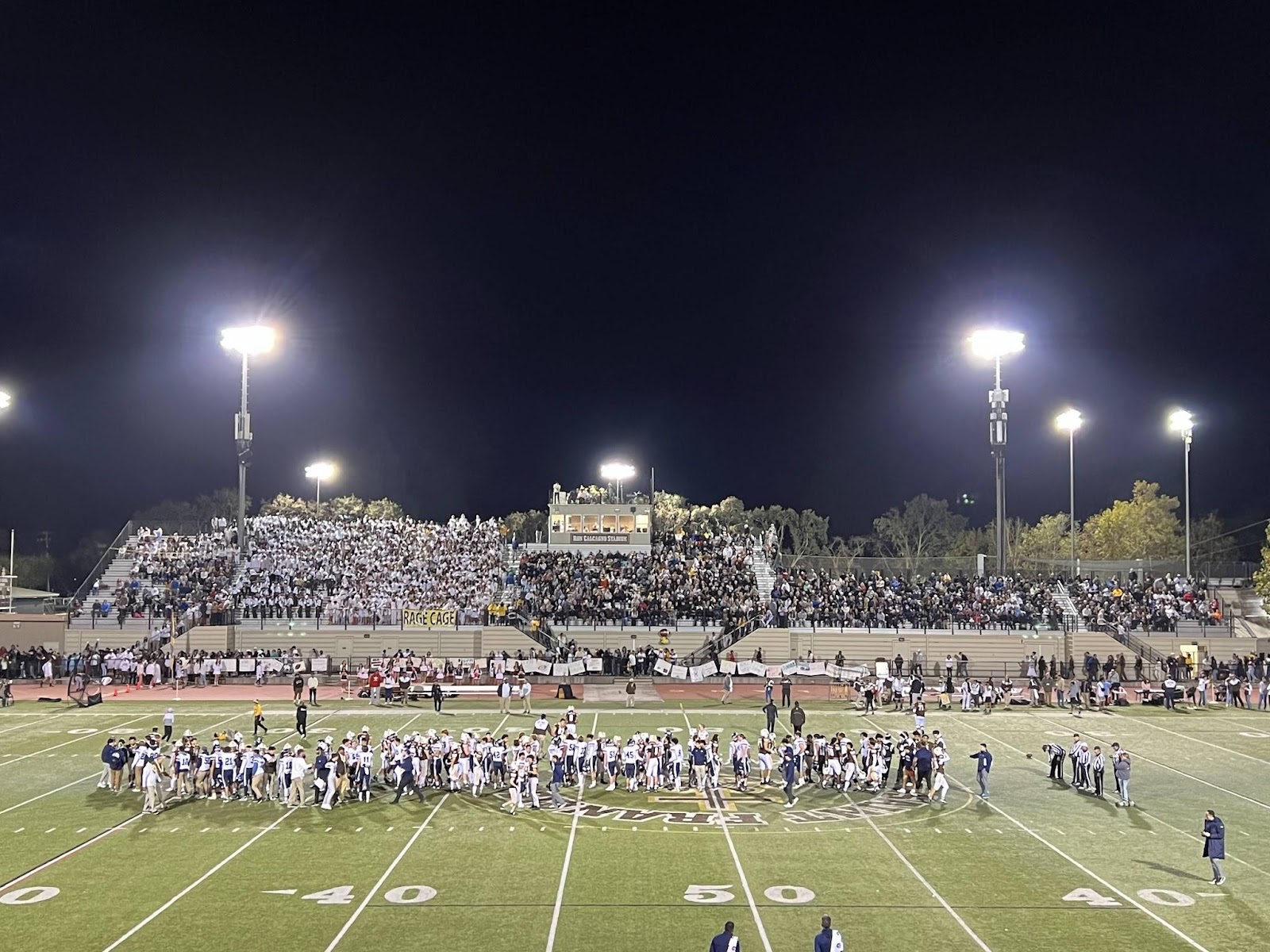 Mountain View, CA — In what was to be a close game between rival high schools St. Francis and Bellarmine, turned out to be a blowout loss by the Bellarmine Bells. In this highly anticipated matchup, both student sections were overflowing with fans and screaming chants back and forth at Ron Calcagno Stadium in Mountain View, California.

Bellarmine won the coin toss and chose to defer, meaning that the St. Francis Lancers started the game with the ball. The Bells started the 1st quarter with a bang, forcing St. Francis to a 3-and-out on the 1st drive of the game. Facing a 4th and 1, at the Lancers’ 21 yard-line, the Bells decided to go for it but could not convert on a QB sneak. St. Francis would then go on a 79-yard drive and score the 1st TD of the game with RB Keala Keanaaina ‘23.

The 2nd quarter started with another 3-and-out from the Bells. The Lancers took over and ended a 45-yard drive with ANOTHER rushing TD by RB Keala Keanaaina ‘23, furthering their lead over the Bells 14-0. The Bells were able to put together a solid drive into Lancers territory again, this time ending their drive with a 28-yard FG by Connor Tripp ‘24. Saint Francis got one more opportunity to score before the half but failed to do so. 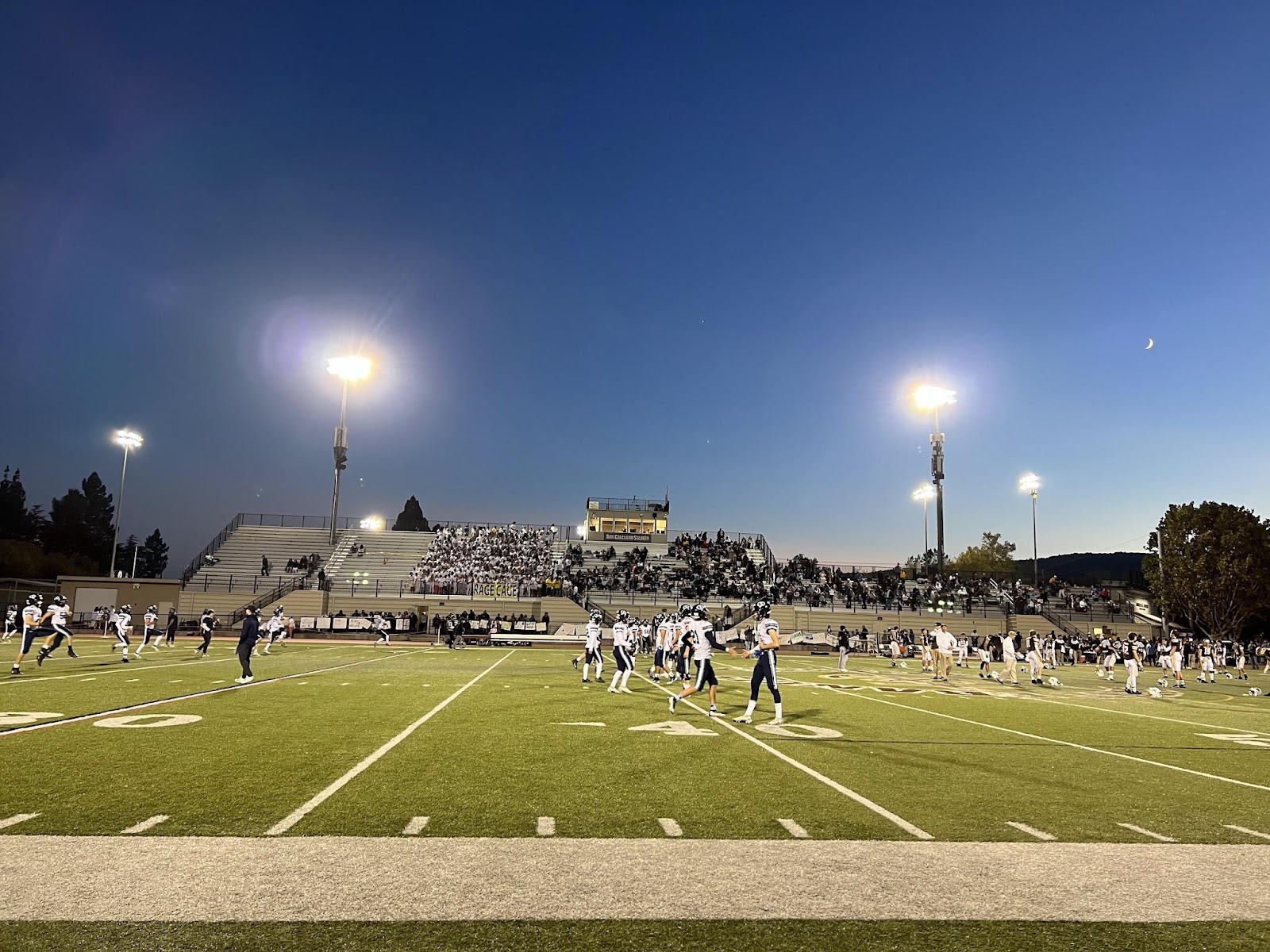 The 3rd quarter started with yet another 3-and-out by Bellarmine. A 36-yard completion to WR Riley Long ‘23 set up the Lancers with another red-zone opportunity. Bellarmine played a good defensive set forcing the Lancers to a 14-yard FG by Christopher Han ‘24, enlarging their lead by 17-3. The Bells then drove deep in Lancers’ territory before coughing up a tipped INT on a 4th down attempt.

In the 4th quarter, the Lancers primarily leaned on their run game to run the clock and tire out Bellarmine’s defense. RB Kingston Keanaaina scored the Lancers’ 3rd TD of the day on an 11-yard rush, putting the Lancers up 24-3 with 10:27 left in the 4th. After a few 3-and-outs, St. Francis scored their 4th TD of the day by WR Riley Long ‘23 on a 10-yard screenplay. The Bells drove downfield setting up a 6-yard TD by WR Wilson Pimentel ‘23 to bring the final score to 31-10.

In the annual Holy War football game, Bellarmine fell to St. Francis 31-10. Throughout the game, Bellarmine did not look in sync on offense – the timing of many of their screen passes was off by a tick. Also, penalties continued to haunt the Bells on both offense and defense. The Bellarmine Bells look to bounce back next week against the Valley Christian Warriors for a chance to make the playoffs in their final regular season game.