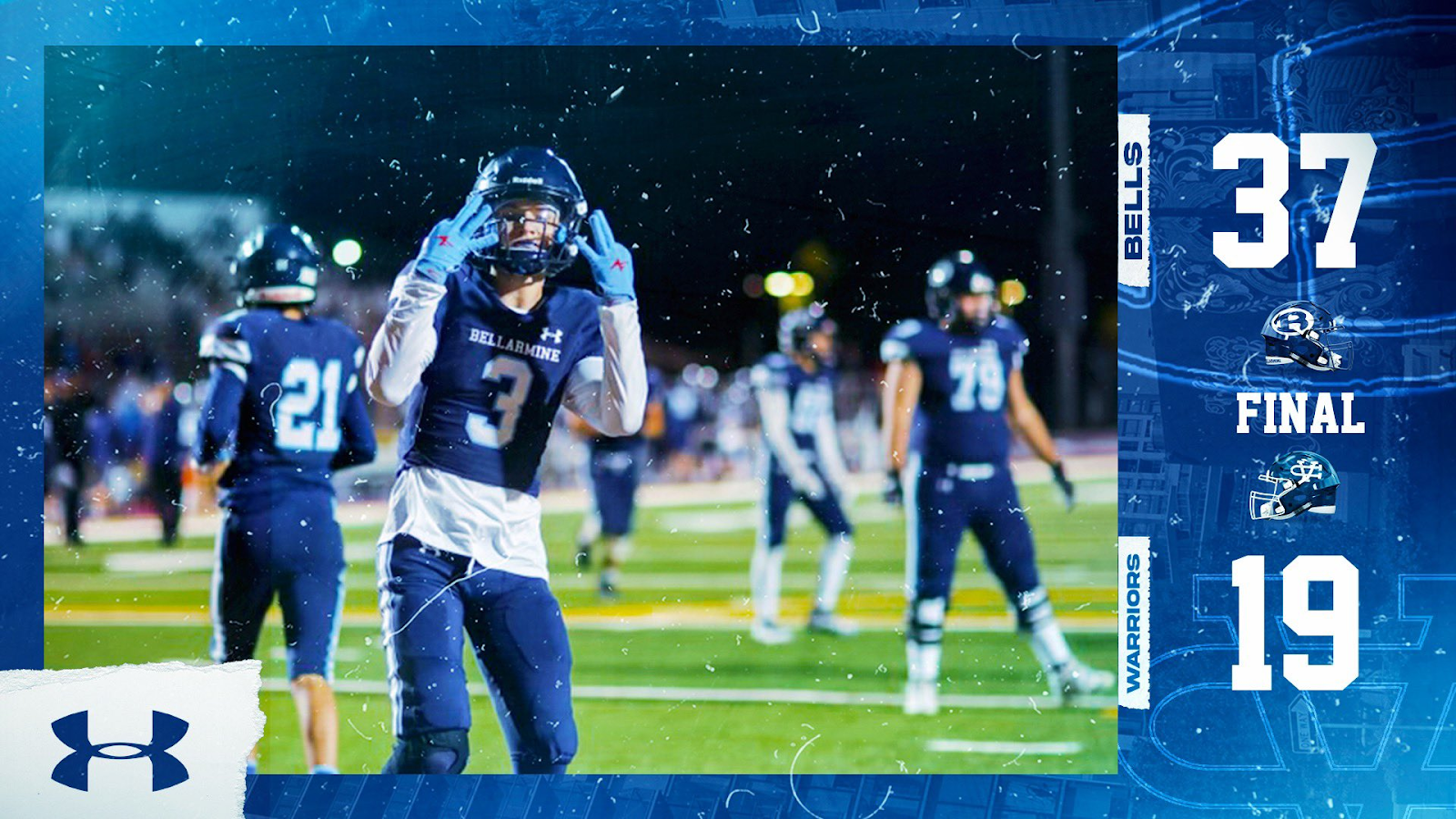 SAN JOSE, CA — In what was to be a low-scoring affair between the two teams in WCAL, turned out to be a lot more eventful as the Bellarmine Bells (4-6 ) crushed the Valley Christian Warriors (1-9), 37-19. The night started out by honoring Bellarmine’s seniors and their families before the National Anthem. Fans started to slowly pack the stands at San Jose City College for the regular season finale.

After Valley Christian won the coin toss and chose to defer to the 2nd half, Bellarmine started with the ball at the 38-yard line. A quick 3-and-out by the Bells led to a long, scoring drive for the Warriors, where they did not attempt a single pass. Valley Christian’s long, sustained drive led to a quick-ending 1st quarter. 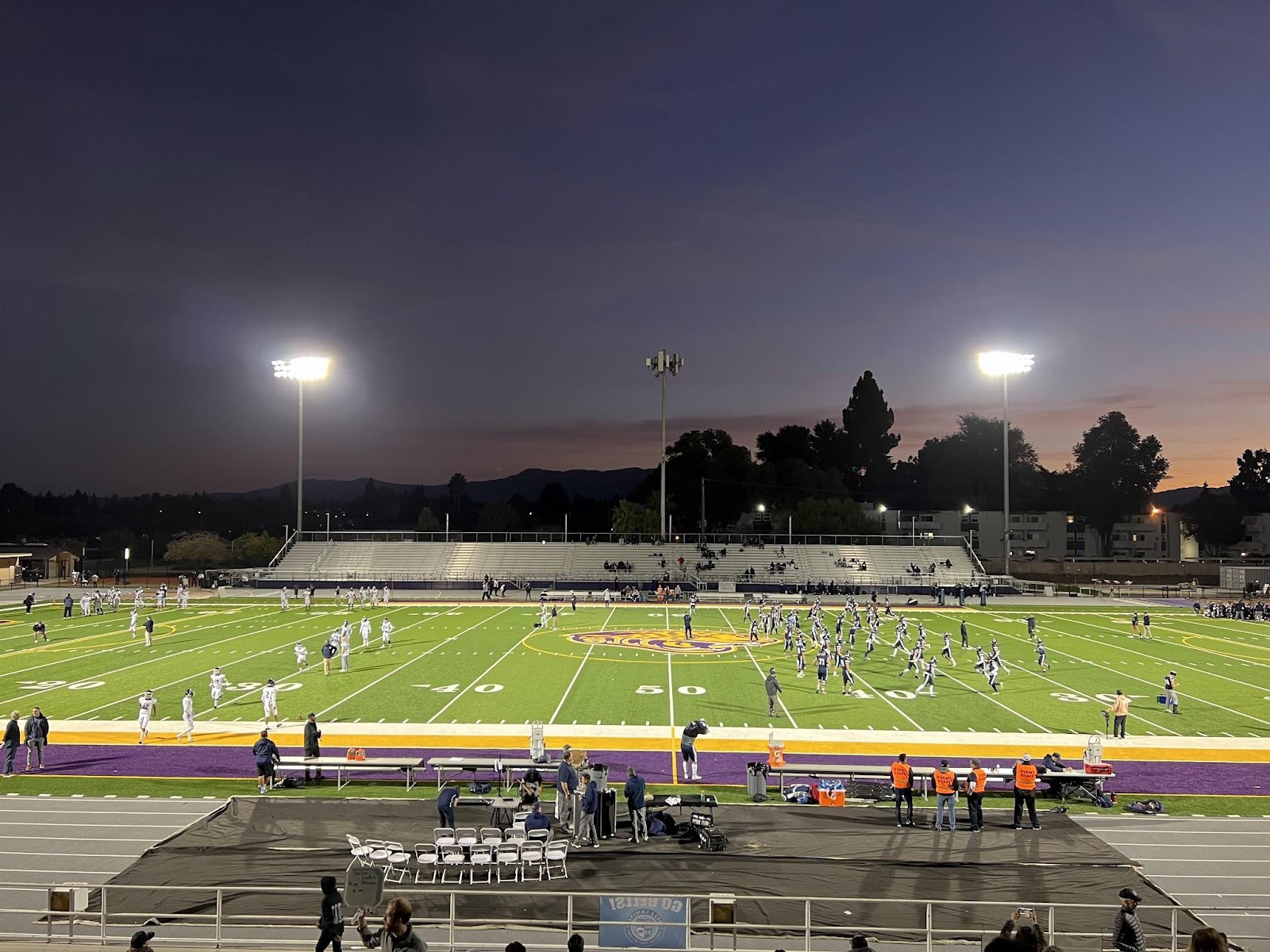 Valley Christian opened up the 3rd quarter with an EXPLOSIVE 69-yard rushing TD, padding their lead at 19-7. Not to worry as Bellarmine answered right back with a 35-yard screen play to none other than Ben Pfaff ‘23, cutting down Valley’s lead to 19-14. The Warriors then drove down the field into the red zone before coughing up a ridiculous 90-yard fumble return by Jake Hanson ‘23 and forced by Brandon Broch ‘23, putting the Bells on top 20-19. On the very next drive, Valley Christian’s QB Mathew Bohtelo ‘24 fumbled the ball on a passing play which was recovered by Reese McKeever ‘25. The Bells then converted a 19-yard reverse-screen TD caught by Parker Threatt ‘24. Bellarmine went for 2 and converted it by Fisher White ‘24, padding the Bell’s lead at 28-19 heading into the 4th quarter.

With 6:05 left in the 4th quarter, the Bells got a safety on a band punt attempt by Valley Christian punter, Joscue Garcia ‘23. On the next drive, VC QB Mathew Bohtelo ‘24 threw an INT to Nate Escalada ‘23 where he returned it to the 2-yard line, setting Bellarmine up for an easy score. Parker Threatt ‘24 was the lucky recipient of the TD on a read option toss, cementing Bellarmine’s lead over Valley Christian, 37-19. With one last drive, QB Mathew Bohtelo ‘24 coughed up his 2nd INT of the day to Evan Chung ‘23, sealing the game.

Bellarmine ended their 2022 football season on a positive note, bringing some momentum into the playoffs. In an injury-filled, up-and-down, season for the Bells, they finished the regular season with 4 wins and 6 losses (4-6). Bellarmine finished 148th overall in the state of California, 11th in CCS (Central Coast Section), and 21st in the San Francisco Metro division. Bellarmine looks to go deep into the playoffs after a full week of rest and preparation for their upcoming game!

Matthew Suh is a staff writer and contributor for The Bell Online, Talking Points Sports, and The Press Box. While Matthew covers football, basketball, and baseball, he tends to focus on the Bellarmine Football Team. Questions? Follow Matthew on Twitter @matthewsuh for inquiries!