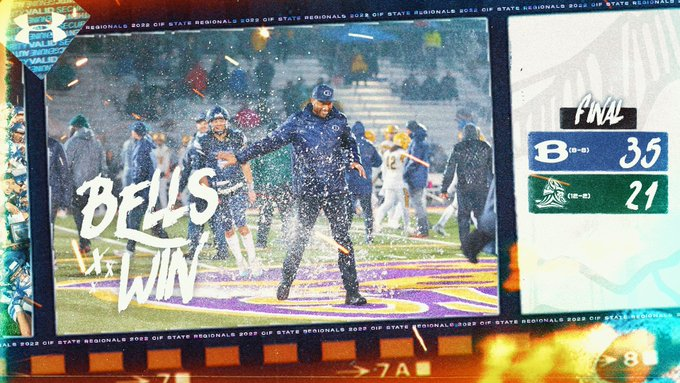 San Jose, CA — On a pouring, wet night at San Jose City College, the Bellarmine Bells dominated Vanden High School in the NorCal Game to advance themselves to the State Championship Game. Due to the inclement weather, Bellarmine knew they were going to have to switch up their game plan which included winning the line of scrimmage, running the ball, and eliminating mistakes (fumbles and dropped passes). Coming into the game, Head Coach Jalal Beauchman was confident that Bellarmine had an advantage due to their offensive line and physical run game and in the end, he was right.

Bellarmine won the coin toss and chose to defer to the second half. The 1st quarter was a defensive battle and started with back-to-back 3-and-outs by Vanden and Bellarmine. On Vanden’s next drive, they put up the game’s first points with an FG. Bellarmine struggled offensively in the 1st quarter and the 1st quarter came to a close with Vanden holding a small lead at 3-0.

Bellarmine’s offense found a rhythm in the 2nd quarter and started to put up points. After two 10+ yard rushes by Ben Pfaff ‘23, he found the end-zone on a 1-yard rushing TD up the middle, giving Bellarmine the lead at 7-3. Vanden tried to respond before fumbling the ball at their own 40-yard line giving Bellarmine a great field position. The Bells made them pay with a 4-yard rushing TD by none other than Ben Pfaff ‘23 putting Bellarmine up 14-3. The clock eventually ran out after both Vanden and Bellarmine tried to put up points before the end of the half.

The 3rd quarter was all Bellarmine and started off with a 50-yard rushing TD by Nate Escalada ‘23 on a 4th down attempt. On that play, Vanden was bringing heavy pressure, and Escalada flew up the seam for an easy score enlarging Bellarmine’s lead at 21-3. Things only got worse for Vanden as they threw a pick-six on their next drive to Bellarmine’s own Billy Ladd ‘24, putting Bellarmine up 28-3. After a quick 3-and-out by Vanden, Bellarmine responded with yet another score, this time to WR Sean McGuire ‘23 making the score 35-3. The 3rd quarter was disastrous for both Vanden’s offense and defense, and they ended the 3rd quarter with another 3-and-out.

Bellarmine opened the 4th quarter with an unfortunate safety on a bad snap while attempting to punt the ball. Vanden was able to score some points in garbage time throwing a passing TD and converting a 2-point attempt right after, shrinking Bellarmine’s lead to 35-13. For Bellarmine, the 4th quarter was all about killing the clock and making sure their starters were well-rested for the State Championship Game. Vanden was able to put up one more score before the game was called early with 1:31 left due to rising tensions on both sides. The NorCal Game ended promptly, and both sides did not shake hands with each other before proceeding to their respective locker rooms.

After another gritty playoff win for the Bellarmine Bells, they have their eyes set on the State Championship Game where they will face Laguna Hills High School from Laguna Hills, CA at San Jose City College this coming Saturday (12/10) at 6 p.m. Good luck, Bells!

December Short Story of the Month Released for the Bell Writing Collective! Check it out by clicking me!