The long and grueling hours of high school football can be demoralizing and can get the best out of a young high schooler. However, senior captain Marcus Mifsud has taken on the 4-year commitment and developed lessons that come in handy on and off of the gridiron. 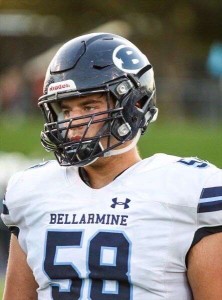 Marcus grew up playing multiple sports but really found football to be appealing. He has played football since first grade, but only one of those years was tackle. As he entered as a freshman, he was an immediate starter and contributor to his team. As a result of his hard work, he was called up to play on the varsity team as a sophomore.

He describes the experience as “Exciting. It was a goal of mine going into my freshman year. I knew I wanted to earn my spot on the varsity squad as a sophomore, and I ended up starting”.

With a rebuilding team sophomore year, Mifsud found plenty of time on the playing field early on, something very beneficial to his growth as a player. Due to the early exposure on the offensive and defensive line, his skill set on the field grew as well as his confidence, while also gaining the trust of his coaches.

However, the biggest improvement he saw was his aggressiveness. He says that “Freshman year I wasn’t as hard-hitting. Over my time on varsity, I have learned to finish my blocks and make sure the guy that lines up in front of me knows he’s going to lose this battle”.

He says he has developed a strong work ethic while also learning to use his time wisely.

“Work ethic is a needed life skill in any profession, things won’t get handed to you and if you want to succeed then you have to come ready to work. Using time wisely is something I recognize every day when I step out on the field. Time is something you can never get back so if you procrastinate or don’t do something productive that time is gone and you aren’t getting it back”.

Whether it is through his presence in the school community or in the locker room, Mifsud is constantly setting an example for others. He tries to lead by example, whether it is helping at workouts, or knowing all the plays and fundamentals in order to assist teammates.

As Mifsud’s final season comes to an end, he hopes to continue his football career in college. He has a few schools on his radar but will make a decision later.

Whether it is his competitive game face or contagious smiling nature, Marcus embodies the true Bellarmine athlete: going above and beyond the expectations, setting an example for others, and being a valuable presence in the school community.